Listen up sports fans! I’m dying a slow death. Suicide by still life. This is an artist community of people who paint nothing but bowls and pitchers with avocados or apples. The brave will throw some grapes in there.

I had to draw these in art class when I was in high school. I hated it then and I hate them now. Some of these guys can paint them with such realism that you could make a good bet it was a photo. Which brings up the point of painting it in the first place when you could have just taken a picture and not spent a year getting the colors to blend just right on a freakin apple.

There was an art show this weekend. They tossed some heavy dough into a big tent, people organizing and judging, setting up displays, and then they hung 100’s of still life paintings throughout the tent. Some of them had ribbons. Big blue ribbons. They said “Your picture of this bottle/avocado theme is the best bottle/random fruit in this category!” There must have been only two categories. Amateur bottle/random fruit painters and Professional bottle /and random fruit painters. 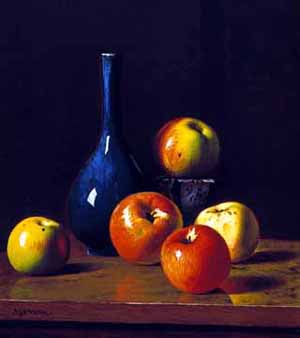 This picture inspires me to bust the bottle and cut someone with it while eating an apple.

I assume there was no cash award, making the amateur a professional by definition.

The music. I have been trying to meet some musicians so I’ll have someone to buy pot from since I got here. I answered an ad on craigslist for a guitarist. When they replied the choice of material was obscure and benign. If ever a town needed a pair of jeans, a chain drive wallet, a pair of Chuck Taylors, and a three-chord-shit-kickin’ band busting out Travelin’ Band like they were playing it as if their life depended on it, this is the place.

Where is the passion? The beauty of simplicity, the beauty of painting outside the lines? Like a child. There are no rules. Will my lowbrow style even be considered art here? What if it’s not? I won’t be offended, mine will seethe with sweat, anger, danger and humor. Art without passion is Still Life, music without it is Christian Rock.

What if I told you I was going to start a band, but were only going to sing about ducks. A whole album about me following a duck, or simply saying what a great duck it is. People eat duck so I could sing about various ways to eat duck. It’s a myth that ducks don’t make an echo… After that I’m out of ideas. Maybe I could write a song or two about a duck when the mood hits me, and then write about a cow, or other bovine.

I’ll never understand Christian Rock. I helped out my Mom’s church by playing in a one time band playing three songs. All mid-tempo, extreme graphic violent accounts for the entire lyric and the chorus guilts us into buying a CD because my grandson likes Rock and Roll music. It’s not the music. It’s Christian Rock listeners. Are you kidding me? Hillsong? Casting Crowns? No one smiles. Not the band, Not the audience just the road manager counting the receipts back stage.

Christian Rock. Not a smile in the creepy-ass crowd

Nothing creeps me out more than the hand raising. It’s way too “Hitler Youth” for me to swallow. Put your hands down and put them together. Maybe Hillsong will crack a smile as they describe Jesus being nailed to a tree. Metallica wrote a song about being trapped under ice on the Ride the Lightning album plus the title song, which I suppose is another description of death. Neither coming close to the description of the Passion. Christian rockers are some sick mother fuckers. A musical snuff film. I have news for you. You can love God and AC/DC.

Longtime AC/DC frontman, Brian Johnson has lost his hearing mid-tour. As the replacement for the late Bon Scott.  Brian could hit the notes and snarled out a comeback album like Back in Black. Due to Brian’s hearing problems the band just let him go. They will be finishing the tour with the dreaded Axl Rose singing lead.

I can only hope they are hiring Axl on to finish the tour, give the fans something special and all of it being a tip of the hat to B. Johnson. If he’s filling in to finish the tour, then Axl will be a hero. If he feels he’s replacing Brian then he will be the villain. I kind of like the idea. Beats trying to buy a ticket for an oldies act from the 80’s with one amazing album under their belt.

AC/DC fans are having a ball. For those about to rock…

GnR back together, doesn’t thrill me and I LOVE the original version of the group. Appetite was on my turntable when it came out. IN 1987! Kids today weren’t even born then. Guys you have been a day late and a dollar short since you became superstars. It’ll be a big-time grossing tour, but it’ll also be playing the oldies, a picture of a once great band. A snapshot of the past. A still life.

Ethel Merman was in It’s a Mad, Mad, Mad, Mad World with and actor named Tyler McVey. McVey was in the movie Captain Newman, M.D. with The Great Santini himself, Robert Duvall. 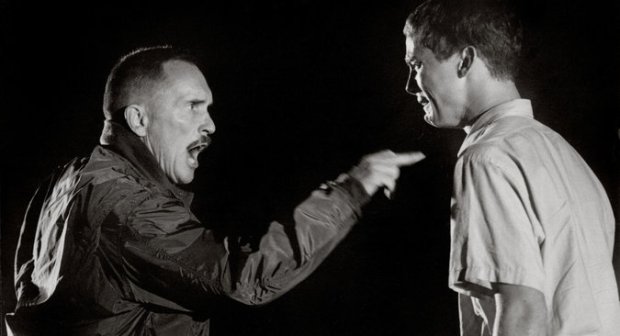 I’m 100% immersed into John Steinbeck country. The places I’ve read about in some of my favorite books are right here. I went to the Steinbeck Center the other day. It was pretty stiff. I did get to see his camper from the non-fiction travelogue Travels with Charley and his handwriting and typewriter. All for twelve bucks.

“It ain’t much of a crime, whackin’ a surly bartender.” ~ Captain Augustus McCrae (Robert Duvall)