What is trolling in social media?
A social media troll, by definition, is someone who creates conflict on sites like Twitter, Facebook and Reddit by posting messages that are particularly controversial or inflammatory with the sole intent of provoking an emotional (read: angry) response from other users.

I was taught to troll by a Master Troller who we’ll call ‘John’. This is not his real name. His real name is Jon. 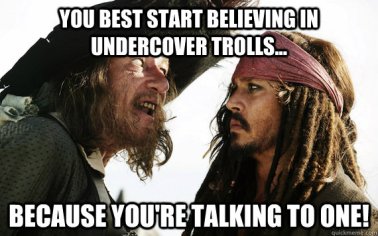 We troll groups that deserve a trolling. Hate groups mainly. We do it for fun, a hobby, a time waster, make each other laugh, and to try and top the last troll the other guy did. It is a form of cyberbullying, but it’s like cyber bullying the Westboro Baptist Church. That OK. No innocent people are harmed in White Hat Trollling.

John successfully disrupted a group of snooty self-impressed acoustic guitarists back when this was all done on a forum. He taught me to troll with intent. Use my own intellect, talents and Google to make these people miserable while manipulating the group. Give them enough rope and haters will turn on themselves.

I have trolled everything from Anti-LGBT sites to Gene Simmon’s fans. I never had one blow up on me like this…

I found a group of Donald Trump fans who were calling Michelle Obama’s MOTHER the worst names you can call a black person while feeling this false sense of pride like Trump himself was watching them. The group was called “The Basket of Deplorables” an obvious play on what Hillary Clinton had called Trump supporters. The group was not even hiding the fact that they were a hate group. Screaming racial epithets at any shade of brown darker than a paper bag, hailing fake news as real and real news as fake. 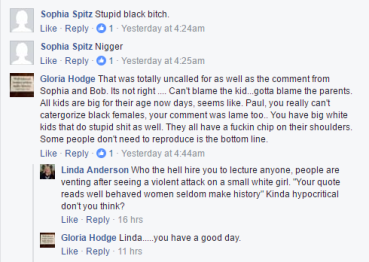 They would ask questions like “Should I be able to fly an American Flag on my property any time I want?” followed by HUNDREDS of “Hell Yeahs” and “Libtards better try and stop me” This is not a debatable group. No discussions under any of the threads, just “Hell Yeah” and “God Bless Donald Trump.” No lie. Not big thinkers but there were 43,000 of them, so they had numbers.

I made the fake Facebook account. DontTred Fred. Disabled, big Elvis fan, Trump supporter. A few image grabs uploaded and memes posted on my page and I was off. I posted fake stories I asked stupid questions and I hit ‘like’ on every redneck, hate spewing post. I was in.

The Best way to troll is to stay just close enough to find their weak spot and jab it. Play along, so to speak.”Obama started ISIS!!!!!” 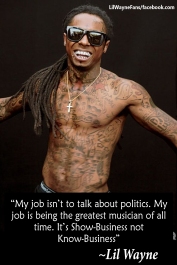 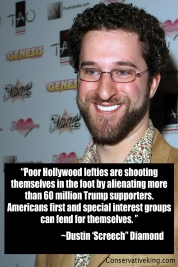 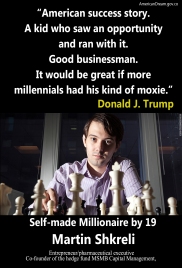 This group was a cesspool of ugliness and ignorance. I couldn’t take this much stupidity and hate for long. I told John I was outing myself on Friday.

I would tell them all how I made up the stories and how they are assholes and bigots and puppy kickers. I told them I was going to send those racist posts to their places of work. That I had more fake profiles to spy on them in the group. I would point out their hypocrisy and they would all feel like fools and then I would waste their time as I sat back and let the hatred of 43,000 Trump supporters massage my feet and those of my high horse.

That is exactly what I did. John joined the group to send me updates when they tossed me from the group. It was time, Tora, Tora, Tora, I wrote John. DontTred Fred posted my Big Meme explaining how I had made them fools. I posted it with the words “Don’t fuck with the King.”. Then I waited. 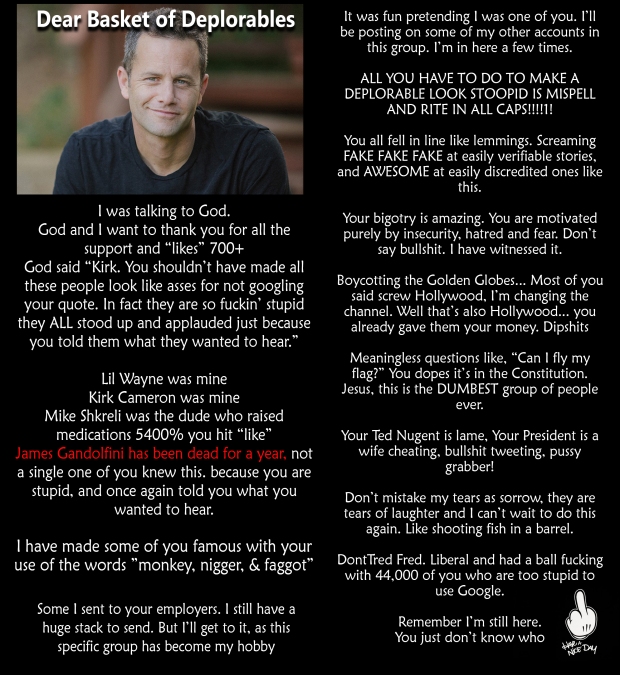 One guy popped up and said “dumbass.”

I replied “lame. Is that the best you got nimrod?”  Goading the Basket of Deplorables group do their best. Come and kill me in my apartment in Terre Haute Indiana.

Then they started coming in.

John hopped in to help get the trolling rolling. He started mirroring them, but as a Trump supporter. IN ALLCAPS RUN ON SENTNCES AND MISPELLED WURDS!!!!!1!! 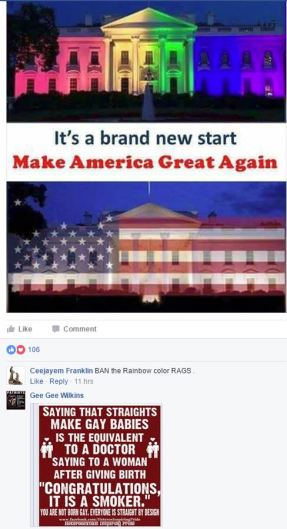 Where was the burst of hate? Could they see my post? I finally told John in a private message that I was confused. Maybe ten people commented and one of them BUSTED JOHN OUT as a fake.

Slowly I came upon the realization that this simple bunch didn’t know I was trolling them. I called them out and they thought it was about someone else. My plan failed due to incoherence on THEIR part. GUYS! GET MAD!  I THINK YOU SUCK AND ARE IDIOTS! Crickets…

I have had my ass handed to me in a debate, I have been caught as a troll, I convinced a death metal band to change their name, but I have never been outwitted by sheer stupidity and obliviousness. AS I WAS TELLING THEM I WAS DOING IT!

I’m still in the group. Head down. The troll was slain with slow wit and obliviousness. Well played Trump supporters….Well played. 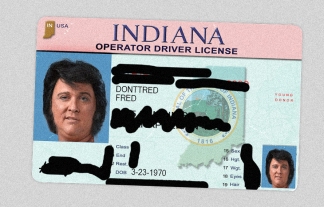 Donttred Fred. The name is a family name. It’s French/Cajun

Someone turned DontTred Fred into the Facebook Police. They disabled my page until I could provide them proof of my identity. No lie. They wanted a copy of my ID. With Photoshop in hand, my Troll came back to life. Reenergized and ready to jump back into the business of fuckery!

You simple bastards got me this time, but DontTred Fred will be back. Don’t fuck with the King.

Hey, you can have a copy of my last album if you click on the button on the side. Hope you enjoy.

It’s a new Year, I miss my friends especially bad. But it is sunny and my window is open. I hear they are getting an ice storm back home. I love you guys. You know who you are.

My lady was eating sushi the other day. It reminded me of the saying “we call that ‘bait’” but not always… There are guys back home that do a type of fishing called Hoggin’.

When you find that hole you hold your breath and go underwater and then proceed to stick your arm into a hole that you can’t see because of the muddy waters that flow down the Embarras (am-BRA) River. If you are lucky, the catfish will attack you in an effort to escape the hole and it bites your hand. Then you hold onto its mouth and yank it out of the water. It’s very eco-friendly. 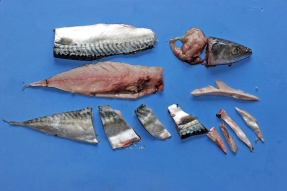 A catfish is really nothing to mess with. They have TEETH! These guys can pull out monster fish. Unlucky Hoggers can lose a finger to a snapping turtle, snakes, or a muskrat all of which also like to live in the abandoned catfish holes. These men have more courage or less sense than I will ever have. They fish with integrity.

When I was a kid there were two certainties in life

May 26, 1975. Wembley Arena, London UK. Evel Knievel will jump over thirteen busses. His farthest jump ever.

Earlier that day Evel walks into the empty arena. He was wearing his leathers from the night before, he smells of alcohol and loose women, having been on a bender the past few days. Standing with the ABC Wide World of Sports crew was announcer Frank Gifford.

Frank says “how ya doin’ Evel?” with a knowing chuckle.

Evel takes a look at the thirteen busses and turns to Frank and says “I can’t jump that.”

Frank Says “Come on Evel, let’s get the hell out here. We’ll come up with something.”

Evel says “No no no. I said I was gonna jump. I’m gonna jump. What do you want me to do? Give all these people their money back?”

Ninety-thousand people have filled the arena. Evel steps out of his trailer red, white and mostly blue leathers, cape and cane in hand. Flashbulbs are popping, The American National Anthem is blasting out the PA and fireworks are lighting up the air.

Evel mounts his bike. Not a Japanese crotch rocket, but a heavy ole’Harley Davidson. He
revves up the bike and takes off ,popping wheelies and putting on a show for the crowd who’ve come to see this former white-trash, county fair stuntman. 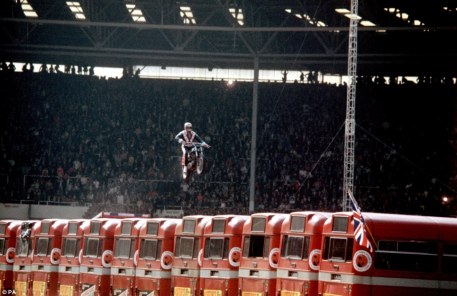 Evel rides up the edge of the landing ramp and gazes across. The take-off ramp is a stretched rubber band that fades off into the rafters. He takes a run at the ramp but at the last minute he turns and speeds by, milking the suspense and bringing the crowd to frenzy like only a dirt-track-carnie can.

Evel takes one more false run before hitting his ramp and roaring his Harley up the bleachers to the top platform where he turns, then pulls the front wheel right to the edge of the ramp.

Evel is now looking at a ribbon of plywood that ends where the thirteen busses start. He can see completely across the distance he has to jump. He in his mind he knows he’s not going to make it.

With a deep breath and a quick prayer, Evel gives his crew the thumbs up. It’s a go!

Evel guns the Harley and screams down the nearly vertical ramp! He’s helling down at top speed! The crowd is on its feet. The screaming is deafening! More flashbulbs pop as Evel hits the end of the ramp and into history!!!!! Now THAT is integrity.

In my mind there are still two certainties.

You can’t say they weren’t men of their word.

Mom and Dad let me stay up late and watch Ali fight on TV late in his career. That was pretty cool.

Hey do me a solid and hit ‘follow’ and ‘like’ I’d love to meet some of the weirdos who read this drivel. Leave me a hello or something in the comments. 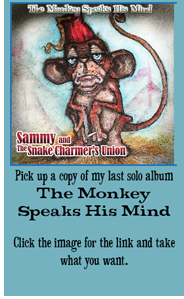